Charity Begins at Home, or, Why Libya and Not Cuba and Venezuela?

OK, the President's had a valid point when he noted that an argument for not intervening everywhere, should not become one for not intervening anywhere. Got it. It's the old idea that just because the cops can't catch every criminal, that doesn't mean they shouldn't catch any.  I, however, don't believe that Obama, Biden, Kerry, Pelosi, etc., made that argument when the time came to go after Saddam.

But, let's be kind. Let's accept the President argument in favor of rational, practical idealism, to wit, we will do what we can to further freedom and protect the innocent where we can.  Under Democratic administrations we have marched off "to do what we can, where we can" in places of little or no interest to the United States, i.e., Vietnam, the former Yugoslavia, and now Libya.  In addition, the Democrats turned a relatively simple and limited humanitarian mission undertaken by Bush (the Elder) in Somalia--done with overwhelmingly firepower which kept the warlords in awe and in line--into the disastrous "Blackhawk Down" mission of nation-building undertaken with reduced firepower and lots of UN meddling and confusion.  The Democrats seem to love responding to the call of distant trumpets, while ignoring those much closer to home, heralding real threats to real US interests.

For some 52 years we have tolerated a murderous, vile dictatorship in Cuba, one which openly has worked for the destruction of  core US interests, and, even, lest we forget, wanted to have the USSR install city-killing mid-range nuclear missiles on the island.  The Castro boys almost provoked a Third World War.  Every argument made about Libya can be made about today's Cuba. A history of mass murder and repression of its people; overt racism; promotion of espionage, terror, and war against the United States, including the murder and imprisonment of American citizens; past pursuit of weapons of mass destruction (1962); fomenting of unrest throughout Latin America including support for guerilla groups and drug trafficking; and open collaboration with the sworn enemies of the United States.  The one thing that cannot be said about Cuba, which can be said about Libya is that it is a "distant land." It is ninety miles from Florida.  For Castro we do not set up "no Fly Zones," nor do we target his air defenses. We send him Jimmy Carter, who while a moron and a bore, is unlikely to put an end to the rule of the Castro boys. 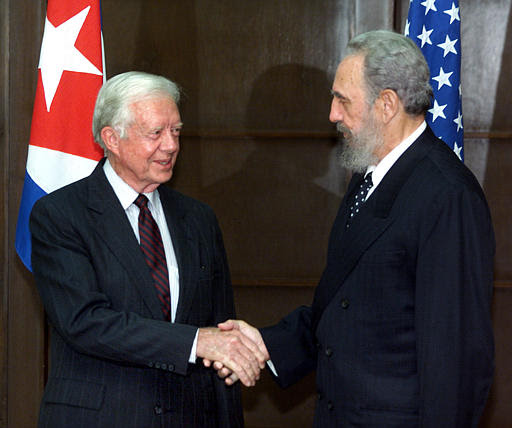 In Venezuela, we have a situation underway that is going very badly. We have major interests in Venezuela. Chavez is repressing his people and turning the country into a vast economic wasteland with perhaps the world's highest homicide rate.  He is imprisoning decent democratic men such as Alejandro Peña Esclusa on trumped up terrorism charges, shutting down the media, destroying the independence of the judiciary, and making irrelevant the Congress . He has launched a "slow motion" destruction of a flawed but functioning democratic system, which is now virtually complete.  He has supported drug trafficking and terrorism against a major US ally, Colombia, and bought himself, with the money we provide, the governments of Nicaragua, Bolivia, Ecuador, much of the Caribbean, and is in the process of buying Argentina and Paraguay.  He had bought Honduras, but the Hondurans tossed out their sell-out President Zelaya, and re-established a flawed but functioning democracy under President Lobo.

As with all other leftist dictators, Chavez is encouraging anti-semitism, putting Venezuela's Jewish community under tremendous pressure, and playing dangerous games with the Mad Mullahs in Iran.

So, instead of dealing with the threat at our door, we run off to deal with the "threat" in Libya.  Got it. The Dems are in power.
Posted by DiploMad at 12:13 AM