Paris "Peace" March: Everything Wrong with Progressivism on Parade

Sorry, I can't restrain myself any longer.

I am sick of hearing about the Paris "Peace" march or "Unity" rally or whatever the lame MSM deems to call it at any particular time. It was not an act of bravery, a show of lack of fear, of standing up to terrorism.

It was a very typical, in fact, an extremely typical leftist/progressive/narcissist manifestation akin to so many others we have seen over the years. It was replete with the usual trademarks of progressivism: prancing and preening; empty slogans and rhetoric; and equally empty gestures and cartoonish props, e.g., giant pencils, rakishly worn bandanas, silly make-up, etc. It was a manifestation on steroids by people who would put lame bumper stickers such as the one below on a PRIUS.

It was also a show by spoiled brats who forget that they have the freedoms they have thanks to 18- and 19-year-old kids willing to pick up a gun and go to war in far off lands against the monsters threatening our homes and families. Continental Europe, especially, has been living in a bubble of safety and security provided by British and American young men. When that bubble gets pierced, the spirit of Petain returns.

It was a "demonstration" in favor of what? Freedom of speech? Hardly. Almost every politician marching there represented a country or a movement which advocates censorship of various types. In favor of standing up for the West and its core values? Nope. A declaration of war on the Islamists who have brought misery to nearly corner of the world? Mon Dieu! Ah, ce n'est pas possible! No, no we must not mention Islam as the cause of the horrors!

The hypocritical press in the West hardly even showed the cartoons for which the Charlie Hebdot cartoonists were murdered. In fact, those cartoons could not have been exhibited at just about any university in the West; the cartoonists would have been hounded from those campuses, and, in many countries, could have faced charges of inciting hatred.

Obama did not attend.

I am surprised. It was the sort of vacuous "I-am-doing something-which looks-daring-but-is-quite-safe" for which The One and His Cohorts are known--e.g., "I Can't Breathe," "Hands Up! Don't Shoot!"--and the multiple nonsensical hashtags and tweets for which our increasingly deranged Progressive Era is so renown.

As the master of hypocrisy and doing nothing real, therefore, Obama should have been there in the midsts of the marchers; he would have fit right in.

Let me clarify: Obama should have been there, but not the President of the United States.

The President of the United States does not do marches.

The President of the United States should act as an adult, not like some overgrown college kid.

The President of the United States should stay home, get his security team together, lay out a plan to strike the Islamists, get on the airwaves and declare that the United States, alone if needed, will go after the sponsors of this murderous ideology.

We, however, have no President; and Obama, the man who pretends to be President, watched TV, instead.

The jihadis have declared war on the West, and the response is a "peace" march? Sitting in their mud huts, surrounded by their 10-year-old wives, the leaders of the jihad must be laughing their heads off, giving each other high-fives, all in celebration of how they can drive the West into surrender at almost no cost.

Let's face it: there is no leader of the West.

Netanyahu was there. He was one of the few there for whom I have respect.

It seems, however, that the "all-inclusive" event designed by France's absurd President Hollande was never intended to include the Israeli PM--nor Marine Le Pen, either. According to sources within the PM's office, the French let Bibi know he was not welcome. They, apparently, did not want the focus "to be on Israel." Netanyahu, of course, decided to go, anyhow--and seeing the strained face on Hollande when he had to meet the PM was delicious.

Israel's PM went for a different reason than the other marchers. He, in my view, went to show the French, and the world, that the roots of Islamic terror have nothing to do with the Israel-Palestine issue. Contrary to the concerns of Hollande, Netanyahu wanted to show that Israel is, in fact, not the focus. The terrorists never even mentioned Palestine as their cause. He also went as the representative of a country that has been fighting these Islamists for decades, and has experienced repeatedly their savageness--and gotten lectured by the Europeans and others on the need to live peacefully with the very people now killing Frenchmen in the streets of France. (See above bumper sticker.) He also went to stick it in the eye of the French government by speaking directly to the Jews of France and Europe. He wanted to remind them of something many of the silly progressive secular Jews of the Old Continent have forgotten: the reason for Israel's existence. Israel is a safe haven for the Jews of Europe, a place where they are increasingly not safe. President Hollande was not pleased and left as Prime Minister Netanyahu began speaking in the synagogue.

That sums it up re the Paris march, rally, demonstration, whatever, as far as I am concerned.

Oh, and by the way, nobody, but nobody should run the picture below of the new Charlie Hebdo cover. This blog won't run it because it is possibly offensive to certain peaceful people of a certain peaceful belief. 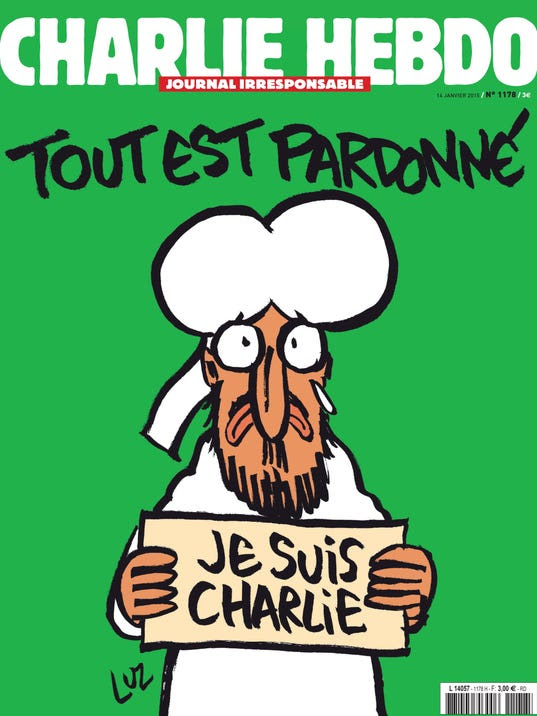