OK. I am in the process of writing something about AOC jumping the shark, or better said the Amazon piranha, but wanted to take a break and fill in my millions of readers (I can be a Dreamer, no?) on my latest acquisition, a Romanian-made AK.

I bought it new at a gun and pawn shop in Wilmington. It's imported by Century Arms, which I understand is now making AKs here in the USA. I never have owned one of these Third World guerrilla icons. I have seen tons of them in my assignments overseas, but never fired or owned one until now.

To start: The gun definitely has the cool factor, about which I have written before. Holding one in your hands, you want to wrap a rag around your head, jump onto the bed of a Toyota pick-up truck, and babble-shout words to the sky while you pump the weapon up and down. I refrained myself. I certainly have the rags, but I have a Chevy pick-up, and that jumping part, well, that's in the long ago past for me. I can still babble-shout meaningless words, however. Not all my abilities are gone, I'll have you know!

Yes, where was I?

Cool. Yes, sir, it's definitely cool looking. On closer examination, however, one does see that it's a pretty crudely made weapon: Stamped parts, kinda loose fit, and it makes an infernal racket when you rack a round. It has a clunky and enormous safety, the trigger pull is nothing to write home about, it can be tricky to get the magazine to sit just right, and ejecting an empty magazine is not always smooth and easy.

But the beast shoots! I ran good American-made Winchester 7.62X39 factory ammo through it, some local reloads, and some cheapo Serbian-made stuff, as well as a few rounds of some otherwise problematic "frangible" ammo. Unlike my much better-made American Ruger Mini-30--which chambers the same 7.62 ammo but would not digest the frangible stuff--the AK ate anything I fed it. No fail-to-feed, no fail-to-fire, no jams, in something over 100 rounds. I am going back to the range tomorrow; my son is bringing his AR, and we are going to have a NATO vs Warsaw Pact demo. 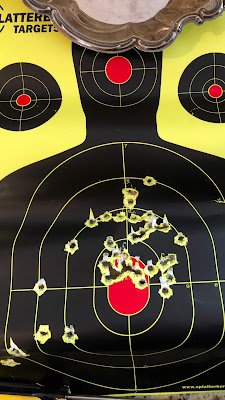 I was standing, using a sling, gun straight out of the box. I started off well enough with a nice center grouping, but after a bit the damn thing gets heavy; I have trouble squinting through the tiny sights; the barrel gets hot; and my shooting starts to drift down and left, and then when I correct, it wanders up and right. It's tiring for an old fart! Now I know why armies want the young ones. I also noticed that the gun is a tad short. That means your head gets real close to the gun itself, and a couple of times the recoil, although not excessive, knocked a hearing protector off my right ear.

UPDATE: I am sorry to report that the Warsaw Pact won the WP vs. NATO "re-enactment." The AK performed as an AK should; my son's Ruger 5.56 repeatedly jammed. We are going to check the gas block and the need for some extra special deep cleaning and oiling. We hang our heads in shame . . .